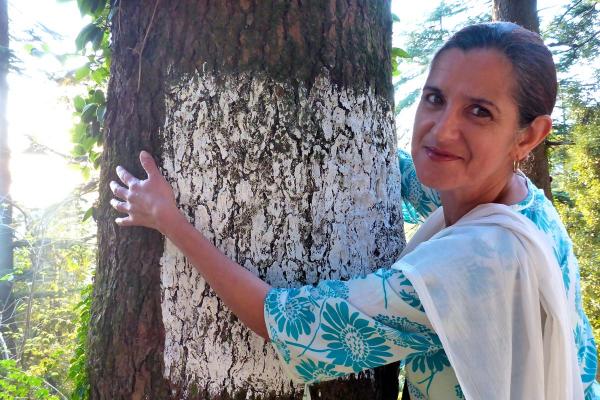 "The trees have no voice of their own." Ghazala Abdullah

Known as The Abode of Gods (Dev Bhumi), Himachal Pradesh is known worldwide for its alluring natural beauty, which draws thousands of domestic and international visitors to its awe-inspiring mountains, rivers, and forests. Trees are the foundation of a strong community and global health. They exhale and we inhale. They are home to innumerable living creatures and other forms of plant life.

In the spring of 2015, one concerned citizen took it upon herself to educate and inform the locals and authorities about the illegal culling of trees from 21 locations in the Dharamshala area. It was just past midnight when Ghazala Abdullah, living in McLeod Ganj for the past 20 years, woke to the sound of an axe chopping down several trees in her neighbourhood. This was the trigger for Ghazala to become Dharamshala's tree saviouress.

Currently there is an ongoing battle in the Court to help the trees. In the meantime, the the Chief Justice has ordered a total ban on any felling throughout the whole state, and has withdrawn the power from the local authorities to grant permission to do so. Government Departments and landowners are now being held accountable for the devastating loss of green cover over the last few decades in this area.

Ghazala continues to fight for trees in the Dharamshala, McLeod Ganj, Bhagsu, and Dharamkot areas. This has included giving tours of the affected sites to various responsible government officials, police, and a representative sent from the Court. She has also started an online petition addressed to the Chief Minister of the state, appealing to him to stop the destruction. She can be seen every day talking to visitors and locals about the urgency of taking collective action, investigating sites of new felling brought to her notice by concerned individuals, and collecting/taking photographs as evidence. This is a courageous undertaking, as she is not only up against powerful vested interests but also the bigger, insidious enemy — Indifference.

The trees of Himachal Pradesh are protected by law. They play a critical role in the delicate ecosystem and are vital to the prevention of erosion during the heavy monsoon rains here in the Dharamshala area, and for supporting the fragile hillsides that are the site of strong fault lines running through here. One individual has given the trees a voice, a voice which has given rise to a thousand more voices — crying out to save our precious trees.

With your help we can save these important trees. Please sign and share this petition to save the trees in Dharamshala at Avaaz.org.

We are happy to give the 2015 Free Spirit Award to Ghazala Abdullah for her work to protect our trees.