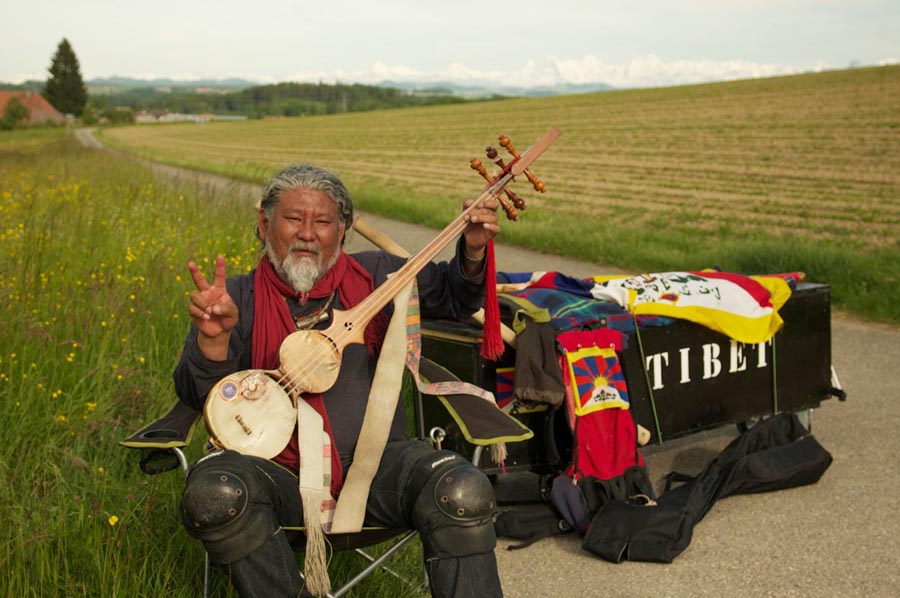 On 16 May 2012 at 10am, Loten Namling began a pilgrimage across Switzerland, pulling a coffin, as a symbol of the slow death of Tibet. Starting at the Bundesplatz in the Swiss capital of Bern, he reached the United Nations Headquarters in Geneva, about 300 kilometers in 50 days. Walking and prostrating himself the entire way, he stopped at small villages, towns, and cities, raising awareness of the drastic situation in Tibet.

The coffin contained not only his Tibetan lute, but his clothes, food, and a tent as well. At each village along the way, he could give a concert of Tibetan songs of freedom.

Why did he choose such a difficult mode of protest?

"First of all," explained Namling, "My father made a pilgrimage of over 1000 kilometers on foot from his tiny village to Lhasa in order to become a monk. The hardship of the journey is always an important aspect of a pilgrimage. Secondly, I see the coffin as a symbol of the incredibly tough, and until today, still fruitless struggle for the freedom of my people. A struggle that goes back to the end of the 1950s. I am not carrying a cross, but I am pulling a coffin!"

He had five goals: "The first one is to draw the attention of the West to the tragedy of Tibet's current situation. I want the West to take action! Secondly, I appeal to China to finally return the Tibetan people their right to freedom! Thirdly, I demand the immediate release of all political prisoners, among whom are countless artists, writers and musicians. My fourth goal is to ask the UN to send a delegation to Tibet, in order to make an objective picture of the situation. My final wish is especially important — after all, I have lived in exile in Switzerland for the past 22 years — I ask the Swiss government to initiate a dialog between the representatives of the Tibetan Exile Government and the Chinese. To invite them for direct talks, here in Switzerland, on neutral soil."

"Within the last few years, no fewer than 55 Tibetans have self‐immolated and yet the world is deaf to these desperate cries for help," said Namling.

At the end of the journey, he was received by 15 bands, with many of his international musician friends, including Franz Treichler and the legendary Swiss band "Young Gods", who was the main supporter of his journey.