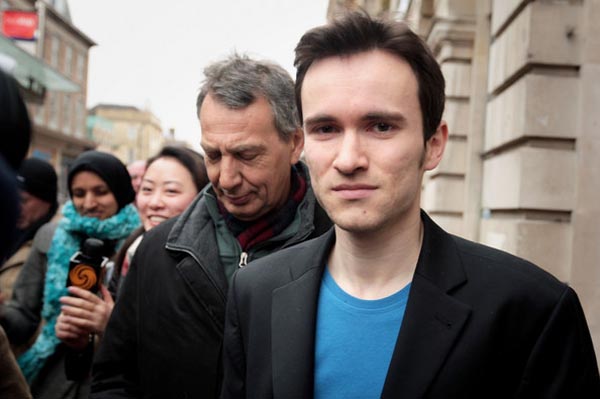 Protester Martin Jahnke hurled a shoe at Chinese Premier Wen Jiabao during his speech at the Cambridge University, after which he was escorted out of the Cambridge concert hall on 2 February 2009.

Although the shoe hurling incident was extensively covered, the actual words uttered by Martin and his intention for the protest were not properly mentioned.

From a video posted on YouTube, it has become clear that the unrecognised man shouted: "Get out of Tibet". This line, missing from every report, made the man's motive for protesting clear.

Martin Jahnke, who was chargedfor a "public order offence", stood up from his seat in the back of a crowded auditorium of about 500, blew a whistle and yelled that Wen Jiabao is a dictator and called for China to get out of Tibet.

"How can this university prostitute itself with this dictator here," he shouted. "How can you listen to the lies he is telling? Stand up and protest and get out of Tibet."

He then threw a shoe which missed hitting the Chinese premier, but landed on the stage a few metres away, though some reports say it landed 30 feet away from the podium. The footage shows two people, reportedly Wen's aides, leaving the stage after picking up the shoe. Some reports say a security guard picked up the shoe.

Before Martin was escorted out of the hall he loudly shouted: "Stand up and protest and get out of Tibet."

Wen Jiabao was giving a speech on the global economy at Cambridge University to mainly Chinese audience of students and dons when the protester stood up at the back and blew a whistle.

Wen paused and then said: "Teachers and students, this kind of dirty trick cannot stop the friendship between the Chinese and the British people." The remark was greeted with applause, media reports say.

People's Daily, the main mouthpiece of the ruling Communist Party, said Wen's speech had won "sustained applause", but did not mention the shoe. Xinhua, the state news agency, said China had expressed "strong dissatisfaction" about his speech being "disturbed" but did not describe what happened.

China tightly controls its media and often suppresses news showing Communist Party and state leaders in an unfavourable light. However, the state-run CCTV departed from the usual practice, and aired unedited footage of the event on CCTV's main evening news report on 3 February night.

Observers have said that the presence of vast online information may have prompted official media to report the incident. Wen's visit to Britain was the last of his European tour that also included Spain, Germany, the World Economic Forum in Davos in Switzerland and the EU headquarters in Brussels. The shoe incident occurred at the end of Wen's three-day visit to Britain. He returned to Beijing the next day.