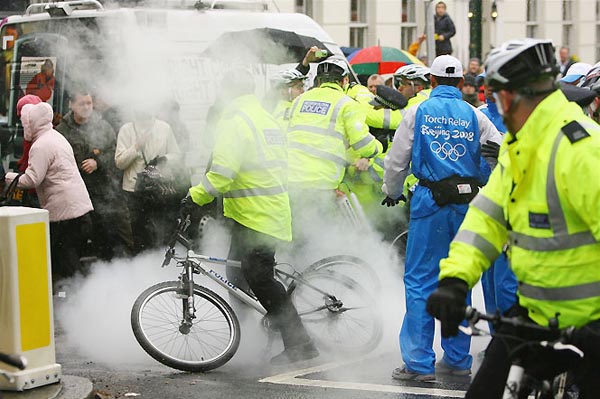 Martin Wyness of Hereford, UK, set off a fire extinguisher as the Beijing Olympics 2008 torch was carried through West London. Hundreds of thousands of people lined the torch's 31-mile route on 6 April, as clashes took place between human rights activists and police.

Mr Wyness set off a fire extinguisher with the words: "propaganda extinguisher" written on the side of it as the torch was carried through Holland Park.

A white haze filled the air after the extinguisher, which was directly aimed at the torch, was triggered.

Mr Wyness, who was wearing a yellow high-visibility jacket, was immediately detained by police.

After being arrested, Mr Wyness told cameramen: "I tried to extinguish the flame. China has no right to be doing what it's doing."

In September, Martin walked free from court after West London magistrates ruled there was not enough evidence to proceed with charges after viewing footage of the incident. Mr Wyness was awarded £300 in court costs.

District Judge Andrew Sweet said: "Having viewed the video footage and listened carefully to your argument, I am not satisfied that the elements (of the statute) are made out."

Outside court, Mr Wyness said the verdict was "a wonderful demonstration of the common sense of the British judiciary."

He said: "The British Government did not have the same common sense when they let the Chinese regime hold their propaganda festival in our country."

A protester against China's human rights, Mr Wyness had denied causing harassment, alarm or distress. Mr Wyness added: "I clearly did not cause alarm or distress on that day, it was just a protest symbolic of what the British people are feeling about what is happening in Tibet."

A month before the incident, Mr Wyness was among protesters who hung pro-Tibet slogans around the necks of China's Terracotta Warriors at the British Museum in Central London

For his indomitable spirit and endless energy, this year's other winner of the Free Spirit Award is Jimmy Jump, known better to his mum, and the European police, as Jaume Marquet Cot.

Jimmy has been making a name for himself over the last few years as a tenacious pitch invader and for high profile publicity stunts, usually in support of worthy causes. His most recent venture was to run onto the pitch towards the end of the Euro 2008 semi-final between Germany and Turkey in Basel, Switzerland, wearing a Free Tibet t-shirt saying "Tibet is not China".