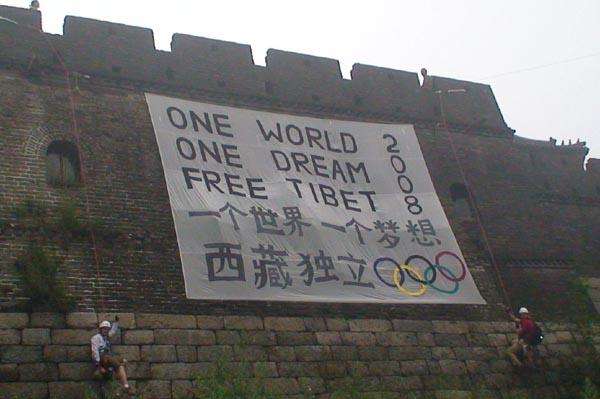 Six Tibet supporters from the UK, US and Canada unfurled a 450-square foot protest banner reading "One World, One Dream, Free Tibet 2008" in English and Chinese from the top of the Great Wall of China on 7 August 2007.

The dramatic action took place on the eve of the one-year countdown to the 2008 Beijing Olympics. Chinese authorities removed the banner after two hours and detained the activists.

Lhadon Tethong, the Executive Director of Students for a Free Tibet (SFT), was in Beijing trying to meet with International Olympics Committee President Jacques Rogge, who was in Beijing for the one-year Olympics countdown celebrations. Lhadon was demanding that the IOC immediately oppose propaganda efforts by the Chinese government to underscore its claim to Tibet, and use its influence to effect substantive progress on human rights in China and a meaningful resolution to the occupation of Tibet. Lhadon had been openly blogging from China at BeijingWideOpen.org, exposing the reality behind China's blatant Olympics propaganda.

Three Tibetan activists, Tenzin Dorjee, Kirsten Westby and Laurel Mac Sutherlin, were datained by Chinese authorities after demonstrating and unfurling a banner reading "One World, One Dream, Free Tibet 2008" in English and "Free Tibet" written in Tibetan and Chinese, at the Mount Everest [Chomolungma - ཇོ་མོ་གླང་མ] main base camp in Tibet.

The protest was held on the eve of the IOC's announcement of the final Beijing Olympics 2008 torch relay route, and as a Chinese team of climbers prepared a trial ascent of the mountain If approved, China will take the torch over Mount Everest and through Tibet, a move that Tibetans and their supporters decry as offering international approval to China's brutal occupation of Tibet.