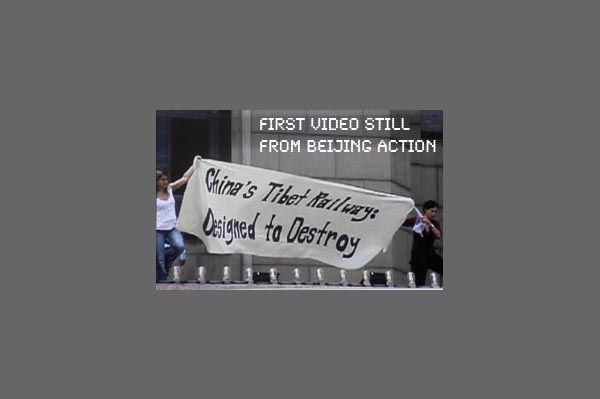 Photo courtesy of Students for a Free Tibet

The protest was held on the eve of the launch of the new rail line that will link, for the first time, Beijing and Lhasa. Tibetans fear that the Chinese Government will use the railway to further its colonisation of Tibet by moving in ever-larger numbers of Chinese settlers and military personnel, while transporting out Tibet's vast natural resources.

Chinese authorities detained three women activists — Katie Mallin, 34, from London, who works for Free Tibet Campaign; Omi Hodwitz, 29, a Canadian from rural eastern British Columbia; and, Kathy Ni Keefe, a 36 year-old American activist. They protested on a platform at the entrance to the station.

"China's Tibet railway has been engineered to destroy the very fabric of Tibetan identity," said Lhadon Tethong, the Executive Director of Students for a Free Tibet.

"China plans to use the railway to transport Chinese settlers directly into the heart of Tibet in order to overwhelm the Tibetan population and tighten its stranglehold over our people."

Hu Jintao, Chairman of the Chinese Communist Party and former Party Secretary of the Tibetan Autonomous Region, officially opened the railway on 1 July in Golmud — an eastern Tibetan border town and starting point for the newly extended 1,200 km line to Lhasa. Chinese authorities claim the railway will bring economic development to Tibet, while Tibetans hold that the true motivation is consolidation of China's political control of the region. Tibetans see the railway as the final phase in China's strategy to wipe out Tibetan identity and culture.

The completion of the railway marks the realisation of Mao's dream to assimilate Tibet into China. Through our global day of action we hope to expose this reality and give voice to Tibetans inside Tibet who are not free to speak out in opposition to this devastating project.

Background on the Golmud-Lhasa railway Following the 1949 victory in the Civil War, Mao and the Chinese Communist Party had dreamed of constructing a railway into the western interiors of East Turkistan (Ch: Xinjiang) and Tibet. A railway would enable rapid movement of troops and ethnic Chinese population in and out of the region, thereby enabling the Party to dominate the region and integrate it successfully with China. The goal was partly achieved with the completion of a line from Lanzhou to Urumqi in East Turkistan in the north-west of the current Chinese map. The railway’s intensely political nature is evidenced by its estimated US$4.3 billion cost with a budget that has increased by 50%.

Katie Mallin, Omi Hodwitz and Kathy Ni Keefe scaled the façade of Beijing's Central Railway Station and held up a banner that read "China's Tibet Railway: Designed to Destroy". Their protest kicked off an international day of protest against the railway. Upon arriving in Hong Kong, Kathy Ni Keefe of Students for a Free Tibet, said, "our actions today mark our solidarity with Tibetans inside Tibet, who have attempted to sound an alarm over China's Tibet Railway, but are unable to make even the mildest criticisms of China's destructive policies without facing severe repercussions."

Text courtesy of Students for a Free Tibet