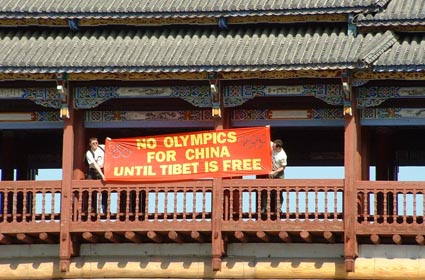 They unfurled a banner that read, "No Olympics for China until Tibet is Free" at the Ethnic Minorities Park in northwest Beijing on 31 August 2004.

When the International Olympic Committee ignored our protests and announced that the 2008 Olympic Games would be held in Beijing, it gave the Chinese leadership the public relations opportunity it most coveted.

We were deeply disappointed but it didn't take long to realize that the 2008 Beijing Olympics could be an even greater opportunity for Tibetans and their supporters. China will be under intense scrutiny from the media and the global public. We can turn the blazing hot spotlight onto Tibet and the suffering of Tibetans under China's fifty-plus year occupation.

Last summer, as the Athens Games heated up, Tibet Support Groups recognized an opportunity — a responsibility really — to fire a metaphorical shot over the bow of the great ship "Beijing '08". We wanted China to know we would be all over them... starting now.

In addition, China would certainly try to turn the world's attention immediately from Athens to Beijing as soon as the 2004 Games came to a close. As the world turned to look ahead four years, we would be there, banner in hand, to turn its attention to Tibet. And so we began conspiring over phone calls full of euphemisms: "can you accompany us on the trek?", "did you talk to our tour guide?", "we'll do it on the morning after the football game," and so on. Tibetans and their supporters worldwide saw the images of Liam and me with our banner on that bridge in the "Ethnic Minorities Park" at the 2008 Olympic Village. But in fact, our action was only part of a larger effort in Beijing over a few days. Only an hour earlier or so, we concluded a press conference at an elegant restaurant in Beijing attended by over 30 members of the foreign press corps stationed in the capital.

The press conference was coordinated chiefly by Alison Reynolds at Free Tibet Campaign. Liam's colleague Paul Bourke, Director of Australia Tibet Council, joined Ali and me at the microphone. All four of us did informal interviews and sat before cameras delivering our message: "for the next four years, we will use the Beijing Olympics as an opportunity to press for Tibetan freedom in every non-violent way possible."

From the front of the room filled with reporters to the deck of the bridge with banner in hand to the interrogation table across from Chinese police, that day in Beijing was nerve-wracking. But it was also only the beginning for our Olympics campaign.

We have less than three years now. For Students for a Free Tibet, the 2008 Beijing Olympics will soon become not simply a campaign focus, but an obsession. We're working right now to raise the money and develop the Big Plan we'll need to train thousands of activists in non-violent direct action tactics, create campaign materials, outreach to media, hire computer geeks, and much more.

As we approach 2008, we have a lot of work to do, but also an incredible opportunity to give future generations the gift of our courage and sacrifice. If we do our jobs, they will raise glasses of chang and sing songs to honour our patriotism and commitment.

After the Banner, by Liam Phelan

We held the banner up high for eight, maybe ten minutes. I don't remember exactly. Then we thought we'd been there long enough, that maybe there was still a chance of getting away. We scurried down from the bridge and through the "minorities" theme park. Several police officers were tailing us, but strangely, not stopping us. When they saw we wanted to leave the park they ran ahead to shut the gate. But the fence was only thigh high, and so we simply jumped over it — it was absurd really.

In the short minute or so that it took to come down to street level almost all of the media had packed up their gear and scampered, off to file the images and stories that would soon flash around the world. Just two journos remained and we did quick interviews. More and more police were arriving, but still not engaging with us. We hailed a cab for a getaway. But then the police pulled the cab over before we'd even started our escape. I made my last phone call for a while, calling the backup team in New York to give a quick report: we're fine, we've just done the action, we're fine, we're in the process of being detained, we're fine. It was the last call I'd make for some hours.

More police arrived, wearing a different uniform, and they escorted us — Han, myself and the two journalists still on the scene — inside a half-built restaurant, part of the theme park. We were interrogated for almost two hours, over the construction din. Then Han and I were taken by car to a police station in another part of Beijing. We asked to make contact with our embassies, and this was refused. The rationale was that we weren't under arrest. Officially we weren't even detained, but we weren't free to leave because they were "asking questions"!

I found out later the journos had been released after a few hours. We were ushered into a small room at the police station. It was a comfortable enough room, with carpet and furnished with lounge chairs. The interrogating continued, then it stopped. Then it started up again, and stopped again. Then it was time for dinner and food was brought to us.

Eventually, at around 11pm, the police escorted Han and I back to our hotel. We were very tired and so were the police. They checked that we did indeed have tickets for flights out of the country the next day (we did). They asked us if we had any more banners in our luggage (we said no). They told us to report back to the police station the next morning (we did).

The next day it seems a solution to the problem of the two foreigners in the media spotlight people was found — the authorities cancelled our visas and stamped them that way. We were provided with new visas — valid for two days only! We had to pay for them too.

The police allowed us to return to our hotel to get our luggage, then they drove us to the airport. Our passports were returned at the check-in counter. We were escorted all the way to our respective gates. At no time did I fear for my safety. The police were professional and courteous at all times. On the second day the atmosphere in the police station was also considerably more relaxed.

Many people have said to me that hanging a banner in Beijing — in China — targetting the Chinese leadership was a brave thing to do. I too think it was brave (being scared and doing it anyway), and one way or another we all have the courage in us. It's also been a privilege to have the opportunity to play a part in this. Tibetans and Chinese people undertaking similar action face longs terms of imprisonment, perhaps torture and even execution.

So as a foreigner, a white person, and part of an extremely well-organised, competent and committed team, I was in a unique position to be able to contribute to the campaign for a free Tibet in this way. And I am thankful for that.

Han-Shan is the Development Director (Fundraiser) at the headquarters of the Students for a Free Tibet in New York City. Han also trains social justice activists in the strategic use of nonviolent direct action. He lives in New York City and enjoys motorcycles, whiskey and rebel poetry (though not necessarily at the same time).

Liam Phelan lives in Newcastle, north of Sydney in Australia. He and his partner have two beautiful little kids. Liam first joined Australia Tibet Council in 2000 and is currently the Campaigns Coordinator. He likes momos and looks forward to the day Tibetan people and Chinese people can enjoy their human rights.