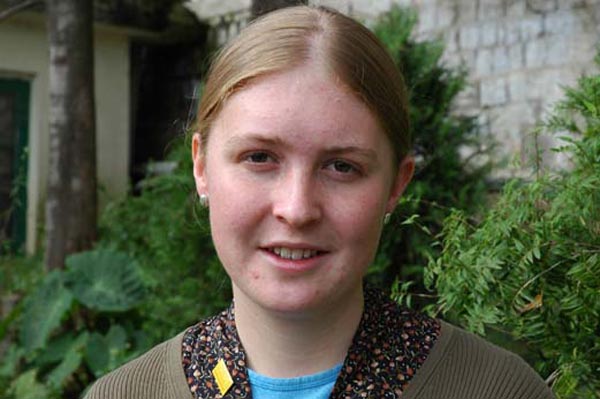 It was on 10 December 2003 that Meghan Claire Howard tucked a Tibetan flag into her pantyhose, put her ticket in her pocket, and headed over to listen to the Chinese Premier's talk at Harvard Business School. She passed easily through security, found the best seat in the house-centre of the fourth row, directly behind the VIPs, directly in front of the press corps, and perhaps most importantly, directly facing the podium.

After the intro and speech formalities it was the Premier Wen Jiabao's speech time. As Wen began to say, "I understand my people, and I love my people," Meghan's moment came. She stood up, pulled out the flag, unfurled it, and shouted, "Tibet belongs to the Tibetan people. We will never stop fighting. I am a voice for those inside Tibet. Free Tibet!"

At this point the Director of the Asia Centre, Dwight Perkins, ran to the microphone saying her behaviour was not allowed and asking her to sit down. While the women sitting next to her ripped the flag out of Meghan's hand and almost tore her shirt off, and while the police arrived at the end of her row, she replied that, "People in Tibet cannot speak, so we must speak for them".

She then left the auditorium and the police informed her that while she would not face legal consequences a report would be submitted to Harvard's disciplinary committee.

Meghan Howard was born in 1982 in Minneapolis, Minnesota to Buddhist parents. Her family moved to Rochester, New York when she was two years old and she has lived there ever since.

From a young age she spent much time around Tibetan masters and their teachings have made a deep impact on Meghan's life and continue to guide her actions to this day.

During her high school time she, along with some other Students, started five chapters of Students for a Free Tibet in local schools organising various activities campaigning for Tibet.

In 1999, when Meghan was 16, she had the opportunity to visit Tibet on a month-long pilgrimage. This visit opened her eyes both to the incredible achievements of Tibetan culture and to the incredible difficulties faced by people living without freedom. She returned to America deeply grateful to the Tibetan people for their work in maintaining the Buddhist teachings for over a thousand years and likewise, deeply committed to working for Tibet's freedom.

Having just graduated in June this year, Meghan spent the summer travelling in China and Tibet and is planning to start work as a Tibetan translator for a small Dharma centre in Arizona when she returns home. She has been greatly touched by the words of support she received, so unexpectedly, from Tibetans and their friends around the world, and she would like to say that given the profound gift of Buddhism the Tibetans have given her, helping them in return is the least she can do.